xDR-16 is a 16 input, 8 output expander for iLive digital mixing systems. Whether you simply want to accommodate more sources or whether you want local I/O in different areas of a stage or venue, xDR-16 adds to the convenience and flexibility of the iLive concept.

Up to two xDR-16s can be added to an iLive System*, connecting via an iLive MixRack fitted with an ACE card in Port B. Each xDR-16 can operate up to 120m from its parent MixRack over CAT5 cable using Allen & Heaths ACE Link.

xDR-16 provides physical I/O expansion  it does not have any DSP processing power of its own. The expander provides access to the powerful 64x32 DSP engine which is at the heart of all iLive MixRacks, making xDR-16 a cost effective way to get more from an iLive system. Example: an iDR-32 MixRack has 64x32 DSP but only 32 physical XLR inputs and 16 XLR outputs. Expanding this system with a pair of xDR-16s creates a 64 XLR input, 32 XLR output system, making full use of the iDR-32s DSP. 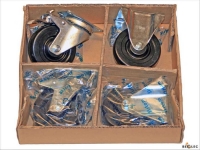