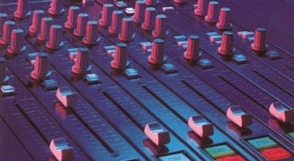 The powerful microprocessor control-system is just one of the features making this console so flexible, easy to use and above all: intelligent. The unique studio intercom function is specifically designed to cope with the ever-increasing communication demands of the modern radio-studio. All this combined with the unique user-friendliness you have come to expect from any DATEQ console.

The BCS70's foundation is formed by the modular frame which may hold up to eighteen modules. Any mix of input modules is possible, so the user can custom-configure any console. The standard frame is empty, except for a scriptspace, a master module and an output section. The console may be used with or without the optional meter bridge.

Microprocessor control
The most unique feature of the BCS70 is the microprocessor control system which has command over all audio circuits, routing and switching. This is the reason why the BCS70 is so extremely easy to use and what gives it the optimised ergonomic design. It also makes remote control of auxiliary equipment much more powerful. In addition to the usual latching or continuous type start/stop contacts, a number of equipment-specific connections is also possible. For instance, equipment CUE, READY or PLAY control signals can activate the indicator lights in the large START/STOP buttons - which are conveniently placed below the faders. The microprocessor memory holds settings for a great number of replay equipment in actual use today. And, of course, you can have DATEQ add all your equipment-specific settings to the memory...

Connections
Each input channel has two separate balanced inputs, each with their own logic and gain control. A 25-pin Sub-D connector handles all signals to and from the module, including those from external equipment (tally, remote control, etc.). The channel insert is also balanced. The BCS70 has a large number of balanced XLR outputs. The (left, right and mono) PGM, AUD and AUX outputs are positioned below the script space on the back panel. The master module features the control room outputs (XLR balanced), outputs for the announcers' and guests headphones and a master insert connector. Additionally there are balanced inputs for the AIR signal and two 'spare' signals.

Input modules
Each input module uses a high-quality conductive plastic fader to control the VCAs (Penny&Giles fader is optional). The VCA is of the newest generation with drastically reduced distortion specs. The signal-to-noise ratio is very high, making the console extremely 'silent'. Each input module has three routing switches, thereby making it possible to do pre-production work during the actual transmission.

Highlights
- The BCS70 frame holds up to eighteen modules
- Each module has two balanced inputs, so switching between two input signals is easy
- Each module has balanced inserts
- Each module has its own microprocessor controlling audio routing, channel settings and external equipment
- There are modules with and without equalizer and/or gain control
- Routing switches. The AUX routing can be (internally) selected pre- or post-fader
- Conductive plastic faders for VCA-control
- Ergonomically positioned, large illuminated START/STOP buttons
- The buttons lamps are controlled by the module (internal tally) or by the connected equipment (external tally)
- Extensive communication facilities between guests, engineer and presenter plus talkback to the
telephone channels by means of an additional communication path - SET-UP button to program the most common control functions
- BCS81 clock/timer module
- BCS68-2 optional dual 30 segment LED stereo VU-meter with peak hold function
- Meter bridge with either analogue VU-meters or a 50 segment LED Peak Program Meters

The Master section has a completely new routing concept to the outputs, using a microprocessor and an audio signal matrix.

A unique feature of the master section are the COM buttons for Guest 1, Guest 2 and the announcer, next to their respective headphones GAIN controls. Depressing a button will send that output signal to the COM mix-buss. This is very convenient, for instance, when during the program a guest would like to continue a telephone conversation with a listener off-air. Or when the presenter would like to talk to reporters on location, without using the CUE function and mix-buss. After switching the reporter's channel ON AIR, he or she will hear the PGM signal return. Switching off-air again, he or she is automatically returned to the COM buss signal feed.

The eight multisource select buttons select which signal will be heard from the control room monitors (AIR ... CUE). These same buttons are also used during SET UP mode to program the settings of the console (using the blue text markings). You can, for instance, select each module between fader- or button-start or whether the CUE button (pre-fade-listen) also changes the monitor source. You may select microphone channels to a different ON AIR group, so the correct ON indication will light when a microphone is 'opened'. Or you may select different mute-settings. A feature is included to enable timer control from specific modules.

The stereo BCS72 input module has two identical line inputs, so you may connect two different signal sources to one module. In addition to these balanced line inputs, each module has a balanced insert point on each input plus a remote control of external equipment.

With the AUX, AUD and PGM buttons you may route the audio signal to three separate outputs. While being on-air you can, for instance, route a telephone conversation to another buss output for recording purposes. The phantom power can be set through an internal jumper, the pre-/post-fader selection for the AUX buss is also set via jumpers.

DATEQ's QDM2 (Quad Dynamical Mix Minus) is a highly advanced telephone routing system. With this system each telephone module can generate its individual clean-feed return with the source signal removed. This obviates the need for separate clean-feed mix busses, so the number of usable telephone hybrids is theoretically unlimited! Each telephone channel can generate a program, an audition a cue (pre-fade-listen) or communication buss signal as return feed.